No Result
View All Result
Home Community, Growth and Housing

Congress created the opportunity zone tax break in 2017; now, some question whether the no-strings-attached approach is paying off

bySophie Quinton
in Community, Growth and Housing
Reading Time: 7 mins read
A A

Share on FacebookShare on TwitterLinkedInEmail
Elyria-Swansea is a short bike ride from the epicenter of Denver’s brewery-hopping and co-working scene, but it feels farther away. Here modest mid-century bungalows and Victorian houses boxed in by chain-link fences press up against train tracks, Interstate 70, marijuana grow houses and a pet food factory that pumps musty smells into the air.

The neighborhood remains affordable in a city where housing costs have skyrocketed. Denver rents are up 75% over the past decade, according to the city’s housing team, and about a third of households are spending more than a third of their income on housing. More people are living on the street or in homeless shelters — almost 4,000 of them, according to the latest count this January.

But change is coming to Elyria-Swansea in the form of a hotel and conference center, high-end office space and “luxury, urban-style residences.”

Investors in all three real estate projects could enjoy a hefty federal tax break for investing in a low-income neighborhood — even though it’s not clear whether such projects will help current low-income residents, or whether they’re the leading edge of gentrification that will eventually push longtime residents out.

“A lot of what’s happening in our neighborhood hasn’t been designed for the people there,” said City Councilwoman Candi CdeBaca, a progressive Democrat who represents the mostly Hispanic area. To her, the tax break is just the latest example of urban renewal, the federal policy of the 1950s and 1960s that gave cities money to raze blighted areas but ended up displacing more than a million people.

“It’s a new iteration of something that’s existed over and over throughout time to really colonize areas,” CdeBaca said.

Congress created the opportunity zone tax break in 2017 to encourage investors to pump money into over 8,000 struggling census tracts selected by states.

But unlike other programs intended to help poor communities, the tax break has no strings attached. The law’s architects reasoned that if investors weren’t constrained by job creation requirements and other conditions, they’d be more likely to invest in the zones.

So investors can get a series of capital gains tax breaks over 10 years for investing in almost anything, from five-star hotels to data centers.

And the federal government isn’t closely tracking where the money goes. All investors have to do is show the IRS they spent money on real estate or a business in a zone. State and local leaders, unable to track projects any other way, are relying on self-reporting, gossip and local news.

“Embarrassingly, the ones that I know about are the ones that I read about in the Denver Business Journal,” said Irene Aguilar, a former Democratic state senator who leads the city of Denver’s efforts to protect residents from gentrification and displacement.

To be sure, some community-focused projects are in the works in Denver and other communities nationwide, and opportunity zone supporters say more will emerge in the next year or so. Even high-end apartment projects generate construction jobs and income tax revenue.

But in booming cities like Denver, the federal government may end up spending more money on tax relief for pricey apartment buildings, offices and hotels than on tax relief for community-focused but less profitable assets, such as affordable housing.

The Denver Business Journal, a business news publication, estimates that $1 billion in mostly market-rate real estate projects eligible for the tax break have been announced so far across the metro area’s 37 opportunity zones.

Perhaps the most ambitious: a $400 million package of hotels, apartments, single-family homes, restaurants, shops and a music venue planned for currently empty land in Aurora, close to Denver International Airport.

There’s not much Denver leaders can do to influence projects. If a developer comes forward with a rezoning request, the City Council can pressure the company to make certain changes, such as setting aside apartments for middle-income residents. “But as you know,” Aguilar said, “we don’t have any mandates that we can put in place right now, and it’s really just a request.”

The office of Denver Mayor Michael Hancock, a Democrat, did not respond to a request for comment.

The opportunity zone tax break is several tax breaks in one. First, people can defer paying taxes on their capital gains if they invest them in an opportunity zone fund, which in turn spends that money on businesses and properties in a zone.

Investors earn a 10% tax discount on those gains after five years, then a 15% discount after seven years. Finally, if they hold on to the opportunity fund shares for 10 years, they can sell them without paying any taxes on the money they made from that investment.

The eventual windfall could be huge. But there’s a time crunch: To get the largest possible tax break, investors need to park their money in a fund by the end of this year. Under the law, they can defer paying taxes on their initial investment only until 2026.

Hence the giddy rush of investment into shovel-ready projects planned long before opportunity zone boundaries were approved by the U.S. Treasury Department, often without the local community in mind.

At an April opportunity zone conference in downtown Denver, hosted by the national accounting and consulting firm Novogradac, the excitement among real estate investors and developers was palpable.

“I frankly look at this legislation in somewhat of amazement,” said panelist Kevin Shields, chairman and CEO of Griffin Capital Company, an alternative investment asset management company based in El Segundo, California. The tax break will generate significant wealth for investors while driving money into communities, he said.

He argued the opportunity zones designated by states include plenty of locations in no need of subsidy, such as downtown Portland, Oregon; Austin, Texas; and parts of Brooklyn, New York.

The combination of good deal prospects and tax relief was so tempting, Shields said, he couldn’t resist throwing $7.5 million of his own capital gains dollars into Griffin Capital’s $275 million opportunity zone fund.

Griffin Capital and San Francisco-based real estate firm Legacy Partners announced last month they acquired land in Aurora, Colorado, where they intend to build a 363-unit apartment building. It will feature “a resort-style pool and spa,” fire pits, a clubhouse, a fitness center, a Pilates room and a rooftop deck. Griffin Capital declined to comment on the project or make Shields available for an interview.

Meanwhile, in Sun Valley, Denver’s poorest neighborhood and another opportunity zone, the Denver Housing Authority has been struggling to drum up investor interest in a master-planned community that will replace an aging 330-unit public housing complex with a mix of public housing, subsidized housing, market-rate housing, and other amenities and services.

“We want to do away with the old, obsolete and outdated — and failed, frankly — model of concentrated, isolated, public housing,” said Ismael Guerrero, executive director of the housing authority.

Opportunity fund managers are circling the $500 million project, but none has committed to it yet, Guerrero said. “They know our work, they know that Denver is a great market and a great city to invest in,” he said. “We just can’t land the planes at this point.”

Guerrero identified two challenges: Investors are looking for higher profits than affordable housing projects offer, and they’re looking for certainty. Much of his project is in the land-development phase, and it’s not clear under IRS rules whether investment at such an early stage qualifies for the tax break.

He said more opportunity fund investors may step forward in the coming months, once the tax break is better understood.

The White House Opportunity and Revitalization Council is trying to encourage investment by driving more federal grants and assistance into zones. Help from federal agencies might sweeten the deal for investors, Guerrero said. “We’d love to get some grants here in Sun Valley to help us with employment and training, with small business development, things like that.”

Jana Persky, the opportunity zone program director at the Colorado Office of Economic Development and International Trade, said it’s not surprising that higher-end projects that have been in the works for a while appear to be attracting more opportunity fund dollars in the Denver area. “Like anything, people are going to pick off the low-hanging fruit first,” she said.

“Our hope is that those types of projects can become models for a broader range of projects in more creative forms — more affordable, or more directly beneficial to communities,” Persky said.

One such project could be underway in Denver’s East Colfax neighborhood. Flywheel Capital, a real estate investment firm, plans to refurbish a building now used mostly as storage and turn it into office space for local nonprofits.

“I would say this is the poster child of the kind of opportunity zone project you want: the developer wants to bring in nonprofits, there’s a lack of nonprofit space in the area,” said Monica Martinez, executive director of the Fax Partnership, a community nonprofit.

As with most other projects attracting early opportunity zone investment, the redevelopment was in the works — and made financial sense — long before the zones were announced. “We kind of got lucky,” said Ben Hrouda, managing partner of Flywheel Capital.

Denver’s 10 opportunity zones — selected by former Democratic Gov. John Hickenlooper and Colorado’s economic development agency with input from local leaders — are among the city neighborhoods widely considered to be poised for gentrification. Residents are riled up about housing costs, worried they’ll be pushed out and willing to lobby against development they don’t believe will benefit them. 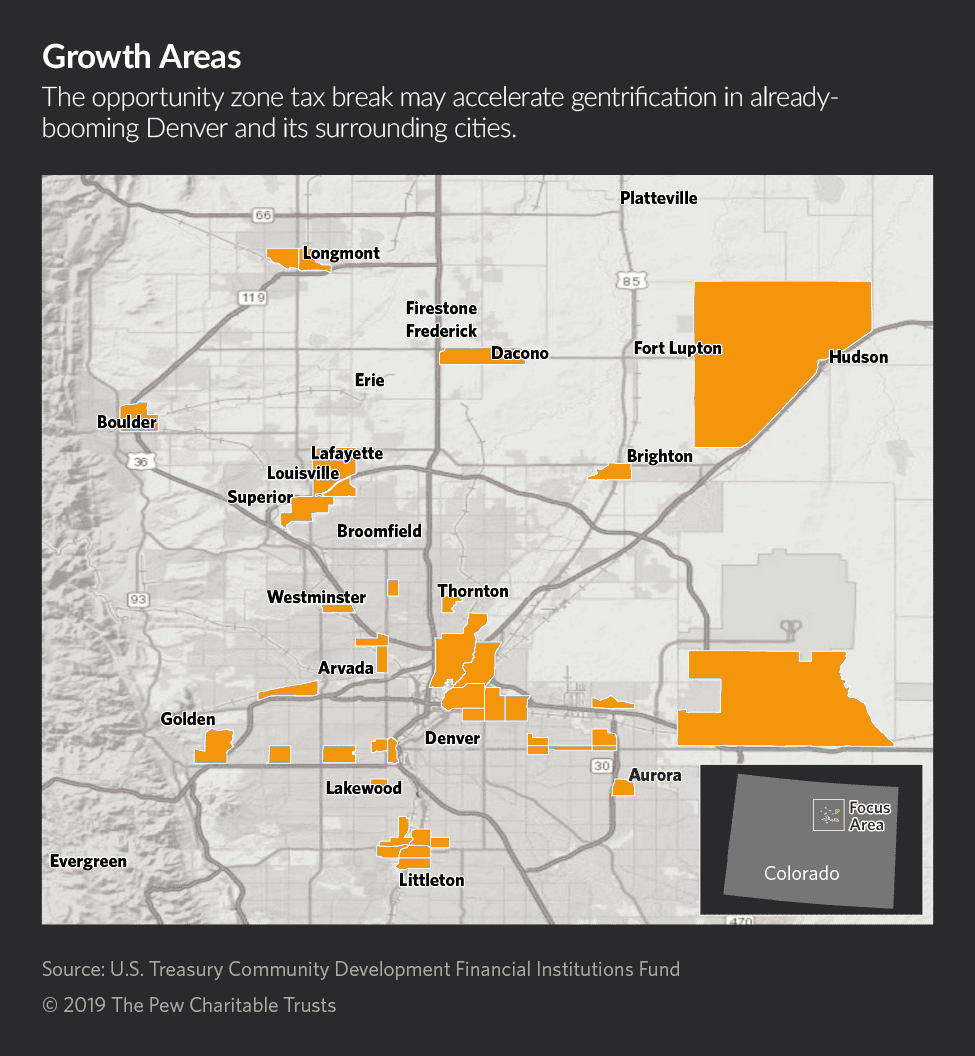 In Elyria-Swansea, the planned redevelopment of an abandoned AT&T call center—a project eligible for the opportunity zone tax break—drew 32 agitated residents to a zoning hearing at the Denver City Council this spring, according to Laird Horigan, a 30-year-old homeowner who attended.

Horigan, a mining engineer who works for a software company, and his wife, an architect, bought a home in the neighborhood four and a half years ago after struggling to find a house they could afford elsewhere in the city.

Now investors Tom and Brooke Gordon are planning to turn an eerily silent office park and weed-strewn parking lot nearby into about 700 apartments, townhomes and other units, 2 acres of open space and playground, studio and performance space for a downtown ballet company, and about 20,000 square feet of restaurants and retail space.

Neighborhood residents didn’t oppose the plan, per se, but they felt that the developers were rushing ahead without seeking community input, Horigan said. A community group focused on that neighborhood and another one nearby, the Globeville, Elyria-Swansea Coalition Organizing for Health and Housing Justice, organized residents to respond to the project.

The City Council recommended that the coalition and developer work together on a compromise. The Gordons agreed to set rents in 70 of the planned apartments at 60% of the area median income and to ensure that the open space was open to the public, Tom Gordon said. They also plan to set aside retail space for local businesses.

Miguel said that as things stand now, there’s no guarantee the project will hire local construction workers or that it will benefit the community in other ways.

Gordon said he’s frustrated by the pushback. In his view, he and his wife are playing by the rules set by the federal government and the city and are trying to do the right thing. “At the end of the day, you’re not going to have development unless it’s financially feasible,” he said.

He does agree with the activists on one point, however.

“I do agree that the federal legislation should have had more strings attached,” he said. “Absolutely agree with that.”