Community planners don't have all the answers.

In the years after World War II, flush with cash and optimism, American planners “skipped the messy iterations” of gradual urban and suburban growth, Charles L. Marohn Jr. explains. Instead, they subsidized ambitious new developments and saddled them with codes aimed at keeping them static. After all, once you’ve figured out the perfect design, why let anyone tinker with it?

“There is no anticipation of change, incremental or otherwise,” Marohn writes of this approach in his book Strong Towns. “The building won’t adapt, the block won’t evolve, and the neighborhood won’t transform over time, at least not easily. As it is built, evermore will it be, world without end.”

The design wasn’t really perfect, of course. These massive community plans made few accommodations for the human need to make adjustments based on experience.

Marohn, a professional engineer and land use planner, co-founded Strong Towns, a nonprofit dedicated to improving the development and growth of cities. His eponymous book at times may seem like a romanticized view of yesteryear, when city leaders were just…better. But city leaders weren’t better before the rise of zoning and similar tools—there were just fewer of them, and they had less authority to carry out grand schemes. 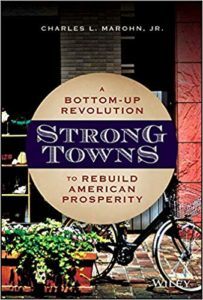 Marohn takes readers everywhere from ancient cities to post–Civil War rail towns, demonstrating how urban centers once grew organically, constantly adjusting themselves to account for new information. Many of these places failed, but the ones that thrived evolved incrementally, taking on additional responsibilities for services like roads and public safety—but always doing so slowly.

Modern planners have failed repeatedly to accommodate the realities on the ground. In his 2018 book Order Without Design, Alain Bertaud recounted his work as an inspector in 1965 Algeria, where residential building permits insisted on “the rules, norms, and regulations for land development and construction” of France. French planners thought they had perfected urban design, so they saw no need to take into consideration the “income, culture, traditions, and climate” of this distant North African country.

Under such end-of-history planning, communities cannot adapt. You needn’t go to Algeria to see examples. Consider the challenges a homeowner faces if he wants to have a “granny flat” on his property, or the gauntlets that must be run by such entrepreneurial innovations as Airbnb.

Many homeowners have bought into that same planning mirage, and they aren’t about to risk their investment by letting their communities evolve. As a result, Marohn writes, “A neighborhood of single-family homes must remain a neighborhood of single-family homes. The person living there is unable to turn higher property values into a redevelopment opportunity that expands the number of units.” As the community stagnates, people move up by moving out; the neighborhoods they leave behind decline and decay.

All this exacts a cost on public resources. Many cities and towns have viewed short-term growth as a good thing, not mindful of the long-term costs of upkeep for roads, pipes, traffic lights, and so on. When the costs of infrastructure maintenance come due, urban leaders attempt to pay for it with the short-term revenue of yet another development—if they don’t defer maintenance altogether. It’s a game no one can win. Ask the people of Detroit, a city that (among many other errors) embraced suburban growth early on, only to be hit with the crushing costs of upkeep. “When you take a prosperous and stable city, spread it out at tremendous cost over an enormous area, denuding and bisecting the original fabric as part of the transition, then saddle it with decades of liabilities, you end up with Detroit,” Marohn warns.

The most financially productive parts of a city are not necessarily the ones you expect. With some exceptions in “highly gentrified areas,” he writes, “poorer neighborhoods tend to financially outperform wealthier neighborhoods.” They pay vastly more property tax and retail tax per acre, and they likely house more people. The planned development may seem like a wealthy enclave, but the cost of public infrastructure to serve it—roads, water and sewers, public safety, and the like—can significantly decrease its value to the city.

Marohn argues that many cities will eventually have to deal with the problem Detroit faced: an inability to support suburban and exurban development. He advocates a sort of triage, the strategy in an emergency situation of assigning limited resources sparingly to save as many lives as possible. “If we can have this conversation about human lives,” he writes, “we can have it about neighborhoods.” People who want to live in suburbs and exurbs should be welcome to do so, of course, but they ought to bear the cost of the infrastructure that such far-flung communities require.

By now, many city governments have realized that the costs of suburban infrastructure far outweigh any benefits of the growth. So they set out to develop their cities’ cores and attract people back downtown. Density is their rallying cry: Increase the number of taxpayers living off the same existing infrastructure to save money. Instead of office parks and shopping malls, urban planners advocate building convention hotels, streetcars, and down-town stadiums.

But that’s not a great idea either. On one of Marohn’s podcasts, the former city council president of Sandpoint, Idaho, described this as an attempt to achieve “Jane Jacobs goals through Robert Moses tactics.” In 1960s New York City, Moses was the planner who proposed several expressways through Manhattan; Jacobs was the author and activist who championed the people in the paths of Moses’ plans. Today’s planners may have learned the dangers of subsidized suburban development, but they’re still addicted to top-down development schemes.

Instead of more grand plans, Marohn wants a return to the days of light regulation and incremental growth: Let the landscape evolve, improving through trial and error. More specifically, he calls for relaxing restrictive zoning rules and focusing on maintaining existing infrastructure rather than building new facilities.

Hike through a New England forest, and you may come upon low stone walls that were previously used to mark farm territory up to the time when the plot’s output could no longer justify the effort and expense of working the land. In much the same way, Marohn suggests that because many suburban developments would be unsustainable if the true costs of infrastructure were passed on to residents, they ought to be allowed to go to seed. This may seem like bitter medicine, but he thinks it’s the only realistic way to move beyond decades of bad bets and hollow promises.

Marohn’s diagnosis rings true. Cities are being flooded with bad development advice characterized by conflicts of interest, inflated estimates of economic impact, and requests for public subsidies that would distort market forces—this time in the service of urbanization. Meanwhile, elected leaders look for anything that looks like a quick win, regardless of the long-term consequences. And all of this is done with unjustified confidence about what the future will bring.

Patrick Tuohey is co-founder and policy director of the Better Cities Project. He works with taxpayers, media, and policymakers to foster understanding of the consequences — sometimes unintended — of policies regarding economic development, taxation, education, and transportation. He also serves as a senior fellow of municipal policy at the Show-Me Institute, free-market public policy think tank focused on Missouri.